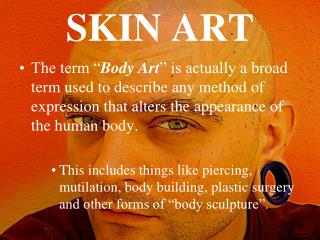 SKIN ART. The term “ Body Art ” is actually a broad term used to describe any method of expression that alters the appearance of the human body. This includes things like piercing, mutilation, body building, plastic surgery and other forms of “body sculpture”. SKIN ART. Cancer of the Skin - . rising incidence the precise relationship between skin cancer and the risk of internal malignancy

IN THE NAME OF THE MOST HIGH - . skin and soft tissue infections. physical characteristics of the skin. mechanical

Health Products Online - Zotezo.com, your one stop destination for health products online, we will discuss benefits of