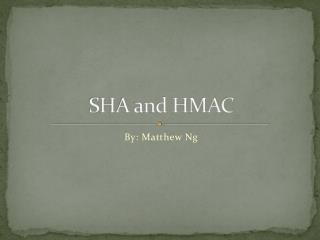 SHA and HMAC. By: Matthew Ng. What is SHA. SHA stands for Secure Hash Algorithm It is based off the Merkle-Dangard hash function There are 3 versions of it with one coming in 2012 SHA-0 SHA-1 SHA-2 SHA-3 (coming soon) SHA-1 and SHA-2 were designed by the National Security Agency (NSA).