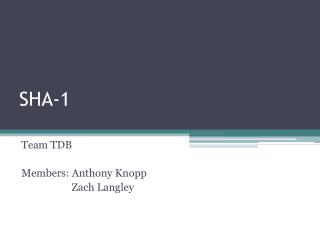 SHA-1. Team TDB Members: Anthony Knopp Zach Langley. Overview. SHA-1 is a cryptographic hash function designed by the NSA and published by the NIST as a U.S Federal standard. It is a Merkle-Damgard construction, 160 bit digest size hash that performs 80 rounds. SHA and HMAC - . by: matthew ng. what is sha. sha stands for secure hash algorithm it is based off the merkle-dangard