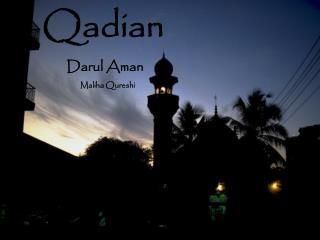 AMAN FOUNDATION - . transforming lives. championing dignity and choice for the underserved in pakistan through

Hadhrat Mirza Ghulam Ahmad of Qadian - . evidence of the holy

Anchor- Aman Kalra - . some of my past works include…. 1. youth festival at d.u and i.p university. 2. co-anchored