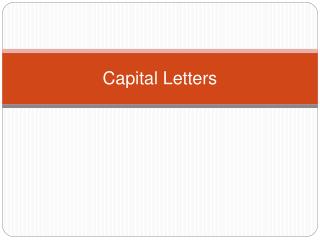 Capital Letters. When to use capital letters. The first words of a sentence When he tells a joke, he sometimes forgets the punch line. The pronoun “I” The last time I visited Atlanta was several years ago. Practice sheet 33.A - . 1. you thirsty?. if a month has five or fewer letters, spell it out. if it has more than five