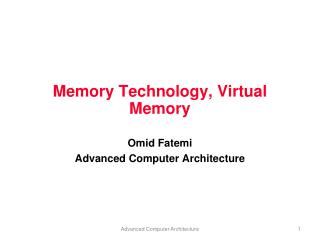 VIRTUAL MEMORY - . introduction. to execute a program, the entire process should be loaded into the main memory. thus the

Virtual Memory - . modern operating systems can run programs that require more memory than the system has if your cpu is

Virtual Memory - . use main memory as a “cache” for secondary (disk) storage managed jointly by cpu hardware and the