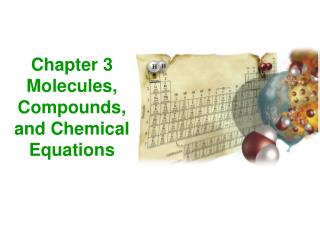 Chapter 3 Molecules, Compounds, and Chemical Equations. Elements and Compounds. Elements combine together to make an almost unlimited number of compounds The properties of a compound are totally different from its constituent elements. Formation of Water from Its Elements. Chemical Bonds. Molecules, Compounds &amp; Chemical Equations - . bonding. two (or more) atoms will bond together because the

Compounds, Chemical Formulas, and Chemical Equations - . prior knowledge. recall our study of elements on the periodic

Compounds, Chemical Formulas, and Chemical Equations - . prior knowledge. recall our study of elements on the periodic

Chapter 3 Chemical Compounds - . when atoms approach other in a chemical reaction, the electrons of the atoms interact to

Chapter 5 – Molecules and Compounds - . law of constant composition every sample of a compound has the same proportions

Chapter 19 – Molecules and Compounds - . 19.1 -- bonding and molecules atoms react /combine with other atoms to form