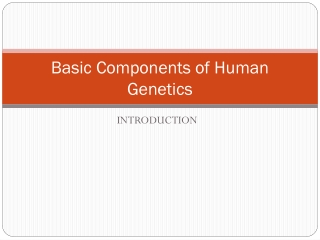 Basic Components of Human Genetics. INTRODUCTION. What is Genetics?. Genetics – It is the branch of biological sciences which deals with the transmission of characters from parents to offspring. The term genetics was coined by Bateson in 1906. It has been derived from the Greek word ‘gene’. Basic Components of Human Genetics - . introduction. what is genetics?. genetics – it is the branch of biological

BASIC GENETICS - . gene : a unit of dna that controls a trait of a particular organism (ex. freckles) allele : an

Basic Genetics - . the information that makes you who you are!!. warm up. write 2 to 3 sentences about genetics. what

Basic Genetics - . allele a version of a gene dominant allele that may mask the presence of another recessive allele