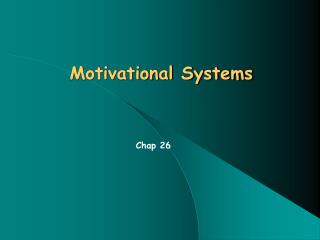 Motivational Systems. Chap 26. Traditional Views of “Motivation”. Contrary to the behavior analytic view, motivation was traditionally held to be a non-measurable “inner state” or “will” that leads to desire (or lack of) to engage in a behavior Quantifying Eudaimonia for Motivational and Social Systems - . mark r. waser http://becominggaia.wordpress.com. what is

MOTIVATIONAL INTERVIEWING - . motivation can be defined as a concept used to describe the factors within an individual

MOTIVATIONAL INTERVIEWING - . the art of possibility in conversation: motivational conversations 101 presented by dee-dee

Motivational Quotes - A very good collection of inspiring and motivational

Motivational Interviewing - What health behaviours do we try and change in patients?. medication

Motivational Interviewing - . “a therapeutic style intended to help clinicians work with patients to address the

MOTIVATIONAL QUOTES - . keep your spirits high. click here to play. if you are never scared, embarrassed or hurt, it