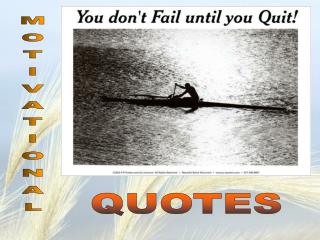 MOTIVATIONAL INTERVIEWING - . motivation can be defined as a concept used to describe the factors within an individual

MOTIVATIONAL INTERVIEWING - . the art of possibility in conversation: motivational conversations 101 presented by dee-dee

Motivational Quotes - A very good collection of inspiring and motivational

Motivational Interviewing - What health behaviours do we try and change in patients?. medication

Motivational Interviewing - . “a therapeutic style intended to help clinicians work with patients to address the

MOTIVATIONAL QUOTES - . keep your spirits high. click here to play. if you are never scared, embarrassed or hurt, it