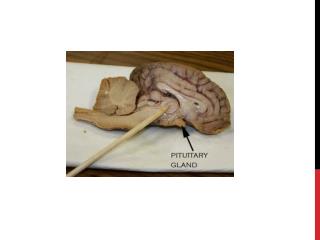 Antidiuretic Hormone (ADH). P eptide Hormone. Also known as Vasopressin or Arginine Vasopressin. Released by Posterior Pituitary. Produced in the Hypothalamus, transported via neurons. Reabsorption of water from Kidneys. Inhibits diuresis; which is the production of urine. Physiology of vasopressin secretion: THE antidiuretic hormone (ADH) - . secretion of adh. the biological action of adh is

SYNDROME OF INAPPROPRIATE SECRETION OF ANTIDIURETIC HORMONE (SIADH) - . background. a variety of disorders are

Syndrome of Inappropriate Antidiuretic Hormone (SIADH) - . objectives. the learner will be able to: describe the

ADH - . 2.75 describe the role of adh in regulating the water content of the blood (not in book) name the different

FUN QUIZ - . refer to your notes on: adh aldosterone diuretics urine characteristics. adh - true or false?. adh is made