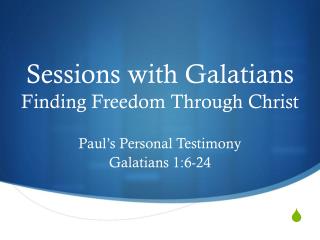 Sessions with Galatians Finding Freedom Through Christ. Paul’s Personal Testimony Galatians 1:6-24. A different type of “Hello”. In most of Paul’s writings, after the greeting, he thanks the congregation for their faithfulness. Galatians 2 The Gospel of Grace Freedom in Christ - . what’s worth f ighting for in church? costly grace defending the

Galatians Series # 12 For Freedom Christ Has Set Us Free - . some responsibilities of the spirit-filled life galatians

Crucified with Christ Galatians 2:19-21 - . i have been crucified with christ; it is no longer i who live, but christ

Freedom in Christ - . freedom in christ. the price god sent his son for us john 3:16 – “he gave his only begotten

The Academic Freedom Sessions - . presentation and research by krista geissler and david hyttenrauch. 1.

Finding Financial Freedom - . live simply. our goal. to live in the joy and freedom of serving only one master.

Finding Financial Freedom - . give generously cheerfully hilariously. our goal. to live in the joy and freedom of serving

Finding Financial Freedom - . celebrate communally. our goal. to live in the joy and freedom of serving only one master.

Galatians 4 Born of Christ - . the galatian dilemma. the galatians have left christ they have followed another gospel

Freedom Through Education - . www.freedomclubusa.com welcome to our world. a little history. how freedom club came to