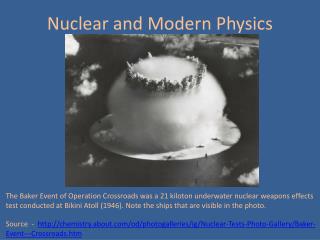 Nuclear and Modern Physics. The Baker Event of Operation Crossroads was a 21 kiloton underwater nuclear weapons effects test conducted at Bikini Atoll (1946). Note the ships that are visible in the photo. Physics Nuclear Physics: Nuclear Reactions - A place of mind. faculty of education. department of curriculum and

Nuclear Physics - . most of the great success of the technology of the world around us results from our ability to

Nuclear Physics - . ap physics b. nuclear physics - radioactivity. before we begin to discuss the specifics of

Nuclear Physics - . protons and neutrons react inside the nucleus elements transmute into other elements isotopes react