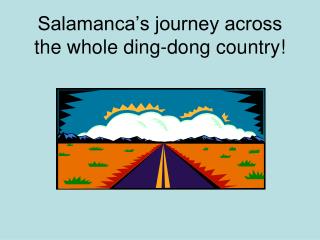 Salamanca’s journey across the whole ding-dong country!. Instructions. As we virtually travel along Sal’s journey, follow along with your own individual map, marking the cities and landmarks we visit. The American Journey Chapter 11: Manifest Destiny - . section 1: westward to the pacific. oregon country. from the

The All New GA Journey - . ga journey overview. as a part of this conference ga leaders will gain a greater understanding

Mike’s Sunday - Unit 10. wonderland &amp; farmland. mike’s sunday. in the morning. 1. are you sleeping? are you

onomatopoeia - . the use of words that sound like the noise they name or that are spelled the way they sound. bam bang

My Journey: - Learner and teacher. my journey:. stephannie herran. i was born and raised for the first eleven years of my