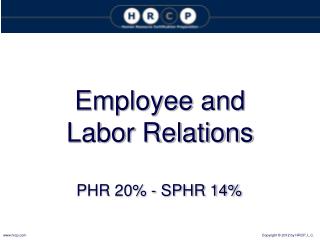 Labor Relations - . unit 4. labor issues. vicarious liability: one party is responsible for the actions of another

Labor Relations - . test your labor relations know-how. 1. an auto mechanic applied for a job with an automotive

EMPLOYEE RELATIONS - . chapter eleven. the most valuable and important resource within an organization is its employees.