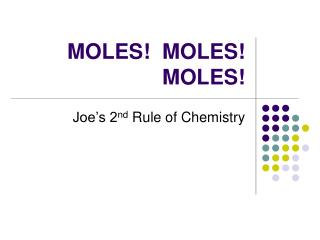 How many eggs are there in 5 dozen? How many moles are in 2.25 grams of the element iron, Fe?

REACTION STOICHIOMETRY - . 1792 jeremias richter the amount of substances produced or consumed in chemical reactions can

Relationship between mass, moles and molecules in a compound - Amount (moles). # molecules or formula units. relationship

Stoichiometry - . chapter 11 (page 326). essential question!!. why do scientist compare mole ratios, and why is it

Chapter 6 - . chemical quantities. how you measure how much?. you can measure mass, or volume, or you can count pieces.