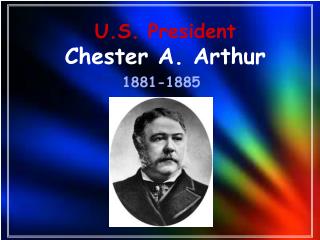 U.S. President Chester A. Arthur. 1881-1885. You will fill in the blanks on your handout with the information that is Bold and Underlined!!!. I. The Political Aspects of Arthur ’ s Presidency. A. The Spoils System. Chester A. Arthur - . overview. twenty-first president 1881-1885 political party: republican the a is for alan. his life.

Chester Arthur - . arthur came to the white house with a reputation of corruption. yet as president, he redeemed himself

THE U.S. PRESIDENT - . inauguration of ronald reagan. u.s. president. one of the most powerful elective offices in

THE U.S. PRESIDENT - . inauguration of ronald reagan. u.s. president. one of the most powerful elective offices in world

Wanted * President of U.S. - Wanted * president of u.s. must have the following credentials : natural born citizen 35

A Game-Eric Chester - . helping generation why workers. word to the whys…. opportunity to change.. beliefs apply

President James Monroe - the 5th President of the U.S. - Aim: how did the monroe doctrine influence the foreign policy in

Driveways Chester - We specialise in driveways, patios and all manner of block paving services, but over the years we