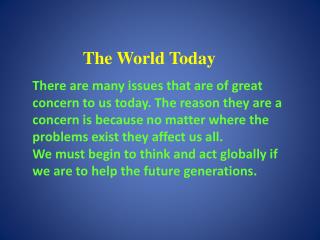 There are many issues that are of great concern to us today. The reason they are a concern is because no matter where the problems exist they affect us all. We must begin to think and act globally if we are to help the future generations. The World Today. ROMANS IN TODAY’S WORLD - . in light of postmodernism by roy h. lanier, jr. what the church faces

The Greatest Salesman In the World - . today i begin a new life. i will greet each day with love in my heart. i will

Chapter 1 Introduction - . population and food production. increasing population needing to be fed will fuel interest in