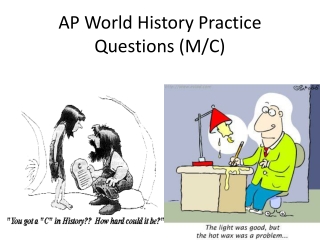 AP World History Practice Questions (M/C). 1. Which of the following was the major effect of the Neolithic Revolution ? (A) The establishment of sedentary village communities (B) The spread of a migratory way of life (C) A decline in total population AP World History - . from human pre-history to the e arly civilization chapter 1. what is prehistory?. the things that

AP WORLD HISTORY - . telescope or microscope – or a bit of both?. 5 thematic periods of history. foundations (8,000

AP World History - . mrs. chamberlin welcome!. writing prompt tues. 8/25/10. what did you find most interesting in your

AP World History - . writing the dbq: thesis statement. document based question (dbq) essay. you will have 40 minutes to