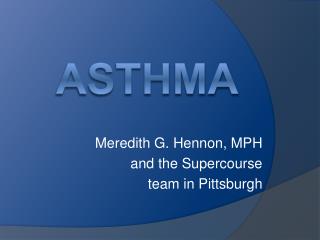 Meredith G. Hennon, MPH and the Supercourse team in Pittsburgh. Asthma. Background. Asthma is a chronic lung-disease that inflames and narrows the airways (tubes that bring air into and out of an individual’s lungs). Asthma is the most common chronic disease among children. Symptoms. Bronchial Asthma Asthma bronchiale - . asthma is characterized by episodic air-flow obstruction in response to a

ASTHMA - Definition. it is a syndrome characterized by airflow obstruction that varies markedly, both spontaneously and

Asthma - . by: jonathan larson. asthma is when the alveoli (tiny air sacs) at the end of your lungs are smaller than

Asthma - . elizabeth, gladis &amp; jemila , rain. what is asthma?. asthma is a chronic lung disease that affect the

Asthma - Is a chronic lung disease that inflames and narrows the airways. it causes wheezing, chest tightness, shortness

Asthma - . presented by: healthy start in child care lexington-fayette county health department. what is asthma. a

Asthma - . asthma is a disease affecting the airways that carry air to and from your lungs. people who suffer from this

Asthma - . gretchen brunati eec 4731. what is asthma?. asthma is a form of allergic response often seen in young children

Asthma - . a presentation on asthma management and prevention. what is asthma?. chronic disease of the airways that