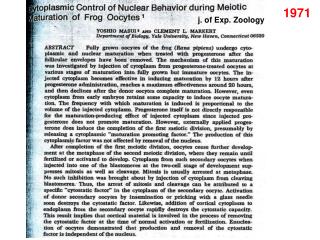 1971. j. of Exp. Zoology. Criteria for CSF. 1) It should appear in the oocyte cytoplasm after Progesterone treatment. 2) It should cause nuclei to arrest in metaphase. 3) It should be maintained until the oocyte is activated. Grendel (1971) - . an overview of john gardner’s work. themes. artists in society and the power of art the importance

Independence: 1971 from Pakistan after a 9-month long bloody war - . facts at a