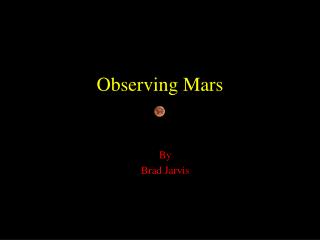 Observing Mars. By Brad Jarvis. Overview. Basic facts Orbits and distance Viewing Mars from Earth The view from space Current exploration Conclusion References. Basic Facts about Mars. Location is fourth from the Sun Day is about the same as an Earth day Observing - . astronomy 315 professor lee carkner lecture 3. our point of view. think about the motions of the

OBSERVING - . using the sense of hearing, touching, smelling, tasting and seeing to collect information about an object

Observing - . do you have any energy monitoring? yes potsdam. during the pass, the instantaneous and the average return

Observing - . next tuesday. we’ll meet at the observatory even if it is cloudy if the weather is really bad (a foot of

Observing users - . the aims. discuss the benefits &amp; challenges of different types of observation. describe how

Observing Populations - . cacn birb andc. direct observation is counting each member in a population. ex: we went to a

Observing Cells - Do now: your digestive system uses many different enzymes to digest food . pepsin is an enzyme in your

Observing Users - . cs352. announcements. see syllabus for upcoming due dates. pricpe and where we are.