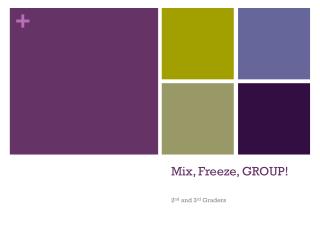 Mix, Freeze, GROUP!. 2 nd and 3 rd Graders. How to Mix, Freeze, Group. The leader of the game asks a question. Quietly find the correct answer on the screen and see what number goes with the right answer. Students rush to form groups based on the answer. Excel Freeze Panes - . when working with large  spreadsheets , it gets a bit frustrating, when you go to read the data

Freeze thaw Weathering - . this type of weathering is called freeze thaw. it is caused by water going in the cracks of

Mix, Freeze,Share - . getting to know you!. walk around the room in rhythm with the music. smile at your classmates! give