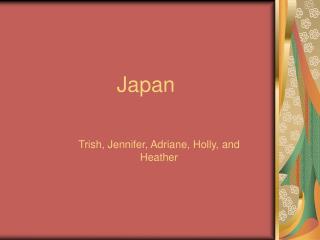 Japan. Trish, Jennifer, Adriane, Holly, and Heather. History of Japan. Japanese history can be traced as far back as 4000 BCE and is characterized by handmade pottery with rope designs. In 300 BCE the introduction of rice agriculture begins the development of a social hierarchy in Japan.