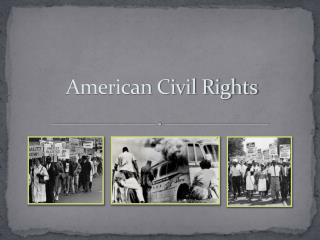 American Civil Rights. Background. 1700-1790: Several black slave revolts occurred; the Constitution of Vermont is the first to abolish slavery 1790-1810: Manumission of slaves in some free states; in 1808 the importation of slaves in America was banned American Civil Rights Movement - . quiz at the end of this overview. take notes and learn!. what does “civil” mean?.

American Women Civil Rights - Civil rights: the rights of all americans to equal treatment under the law. . voting is a

African American Civil Rights - . analyze the naacp, unia, adl, aclu. apk. importance. the naacp did all of the following

CIVIL RIGHTS: An “American Dilemma” - . october 7, 1999. the context of the civil rights struggle. the american

Civil Rights in American Politics - . when can government make distinctions, classify people or treat them differently;