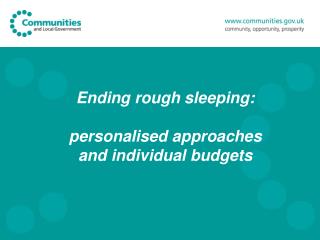 Ending rough sleeping: personalised approaches and individual budgets. What will success look like?. We want to ensure people get the help they need so no one has to sleep rough and, most importantly, no one is living on the streets in England in 2012. Approaches (Types) of History - . the question of how a historian approaches historical events is one of the most

Co-occurring Substance Use and Mental Disorders in Adolescents: Integrating Approaches for Assessment and Treatment of

Protecting Babies: Breastfeeding and Sleeping - . learning objectives. by the end of this presentation, participants will

Introduction to Public Budgeting - . november 17, 2012. what is budgeting?. budgets link tasks to be performed with the

Bringing Value to the Table Without Ending Up on the Menu - . r. allen coffman, m.d., f.a.a.p. president tn chapter of