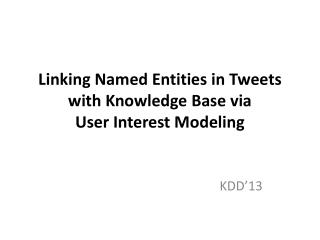 Linking Named Entities in Tweets with Knowledge Base via User Interest Modeling. KDD’13. Task. The task: is to link the named entity mentions detected from tweets with the corresponding real world entities in the knowledge Application : personalized recommendation , user interest discovery.

The Very Best Tweets of #SOCHIPROBLEMS - Sochi 2014 has kicked off in a big way on the internet, with its very own tag

USER GUIDE - . learn how to use your mobile phone to send and receive money. version 3.0. table of contents. 1. what is

Financial &amp; Personal Interest Disclosure - . “the people have a right, an indisputable, unalienable,

Michel Foucault: Biopower - . biopower. the internalization of scientific concepts of health and normality which are