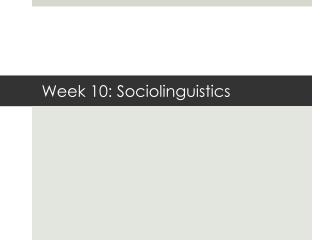 Week 10: Sociolinguistics. Cockney Dialect. Used in London by the working class in certain areas Characterized by its own special vocabulary and usage, and " rhyming slang .’. Reflexive Formation .

An Introduction to sociolinguistics (Holmes, 2008) - . linguistic varieties and multilingual nations as