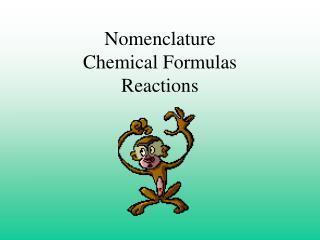 Chapter 9 (9.1-9.4) - . chemical reactions in aqueous solutions. 1. observing and predicting reactions. how do we know

Naming Compounds and Writing Formulas - . metals and nonmetals. for nomenclature purposes, metals are to the left of the

How Can We Describe Chemical Reactions? - . chemistry unit 9. main ideas. chemical reactions are represented by balanced