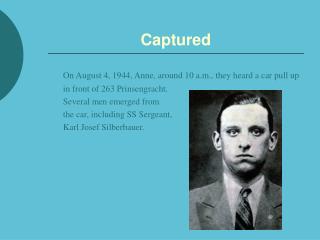 Captured. On August 4, 1944, Anne, around 10 a.m., they heard a car pull up in front of 263 Prinsengracht. Several men emerged from the car, including SS Sergeant, Karl Josef Silberbauer. Captured. Why Muscle Cars Captured American Hearts? - The history of true muscle cars was short unfortunately, but these cars made

Tail substorm dynamics captured by HENA - . hena observes enas coming from 12 re in the magnetotail. the observed tail

The Genuine Estate Trap - Will You Get Captured? - As soon as again with no money (other than perhaps the ten bucks) and

First injection: beam1 captured and circulating (idem for beam2) - Highlights of the ats md part i (injection and ramp)