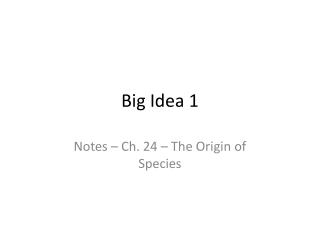 Big Idea 1. Notes – Ch. 24 – The Origin of Species. The biological species concept. Species is a Latin word meaning “kind” or “appearance ” Remember, a species is a group of organisms that can reproduce fertile offspring Big Idea 1 - . ch. 26 – the tree of life. geologic history and biological history have been episodic, marked by

Big Idea 1 - . ch. 25 - phylogeny. overview: investigating the tree of life. phylogeny is the evolutionary history of a

Big Idea #1 - . the process of evolution drives the diversity and unity of life. natural selection is a major mechanism

BIG IDEA #1 - . a force is an interaction between two objects. this can either be a push or a

Big Idea 1: Evolution - . essential questions. what role does evolution play in the organization of living things? what

WELCOME TO BIG IDEA 1 - . grade 4. while we are waiting to begin, please make sure that you have: • signed in on the

BIG IDEA: - Micro and macro economic, investment and prudential decisions are made on the basis of financial reporting by

Big Idea: - . air is something real and takes up space.

Big Idea - . the ocean is important yet relatively unexplored. the science of marine biology.

BIG IDEA: - The american war in indochina changed australian society by promoting a modern liberal democracy that was

Big Idea - . we will find joy in the lord as we intentionally lose our lives in christ and live to give our lives away

Big Idea - . electricity and magnetism are related effects that have many useful applications such as conversion to heat,