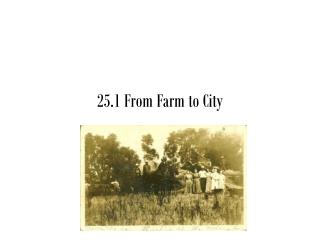 25.1 From Farm to City. Life In Rural Texas. Most family members in rural Texas helped with farm work during the early 1900s. Texas farm families worked year round. Crops had to be planted before spring and harvested before winter. To Kill A Mockingbird - . harper lee. chapter 1. the story is narrated by jean louise finch (scout) simon finch (a fur

An important social aspect of the early part of the Industrial Revolution in England was the - 1. the agricultural

Animal HANDLING AND FARM structures - . learning objective. upon completion of this unit you will be able to identify the

Animal HANDLING AND FARM structures - . learning objective. upon completion of this unit you will be able to identify

Down on the Farm - . find out where our commonly used products originated by: christine malecki. welcome to my farm!