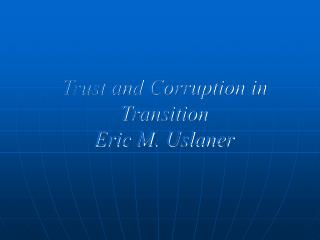 Trust and Corruption in Transition Eric M. Uslaner. Strategic trust: trust we gain from daily experience. Particularized trust: trust in people like ourselves. May stem from direct experience or from stereotypes. Trust has many different meanings:

Trust - . prakash kolan srikanth palla. trust. trust is a social good to be protected just as much as the air we breathe

Introduction to Secondary Transition - . an overview of the variables affecting transition services and planning options

Transition Northfield - . patricia benson board of directors, transition us. sharing information and resources is a

We Provide the Following Services to Brazos Valley Residents - . personal prayer: we will pray for you &amp; your

The Daily Corruption | 4 January 2008 - . one of the largest corruption scandals in czech history has broken out at the

Author Study: Eric Carle - About eric carle. eric carle was born on june 25, 1929 in syracuse, new york. when he was in