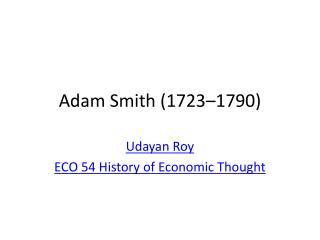 Adam Smith (1723–1790). Udayan Roy ECO 54 History of Economic Thought. C hief contributions. Built a coherent and logical theory of how the economy works The elements of Smith's theory were mostly already available in the writings of earlier writers. The Nutcracker - . by adam smith and sergio matlalcuatzi. how it

The Storming of the Bastille, as depicted by Jean-Baptiste Lallemand (1790) - . james gillray, the blood of the murdered