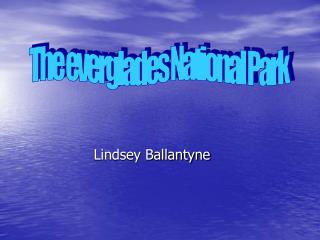 The everglades National Park. Lindsey Ballantyne. location. Everglades is located on southern section of the Florida peninsula, about 20 miles away from the Biscayne National Park. size of the park. The park is about 1,509,000 acres

Alpha Beta Kappa Chapter - . spring 2011 initiation. greetings candidates! . my name is lindsey lamb and i am the current

The AIDS Institute: Funding the Ryan White HIV/AIDS Program-Today and Beyond - . ryan white all grantees meeting

Great Leaps Reading Program - . lindsey calabrese emily lewandowski. what is it?. not designed to specifically teach

Lindsey Nicole Henry Scholarship for Students with Disabilities Program - . an introduction to the bill.

The Salem Witch Trials vs. The Crucible - . by: maigen agana, lindsey aldridge, and jerry chang tas: bradley, diaz, and