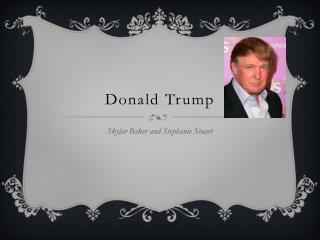 Donald Trump. Skylar Baker and Stephanie Stuart. Personal Life. Born- June 14, 1946 (age 68) Trump was born in the Queens, New York. He attended the Kew-Forest School in Forest Hills, New York up until the age of 13. At 13, his parents sent him to the New York Military Academy. Donald Trump - . by: sarah hirt. “if you're going to be thinking, you may as well think big.” donald trumpski. who is

Donald Trump Presidential Inauguration Shirt - !!! please contact us before you place your order for size/color

Donald Trump – Make America Great Again!! - The country is going to hell, we have people who don't know what they're

Donald Trump Rally in Cedar Rapids, Iowa - President donald trump holds a rally with supporters at an arena in cedar

Marketing Lessons To Be Learnt From Donald Trump - Donald trump has been building his barnd value for while now. now he