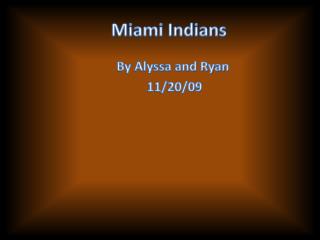 Miami Indians. By Alyssa and Ryan 11/20/09. Miami Indians. Miami people lived from the 1700s up to 1818 They lived in Pickawillany , Maumee valley, and by the Miami river. Miami Shelter. The Miami Indians lived in longhouses and wigwams that could hold 7 people Indians of Indiana: The Miami Tribe - . click here to continue. hello! my name is little turtle and i will be your guide

INDIANS - . the tonkawan indians of texas. the name tonkawa is from the waco term tonkaweya, meaning &quot;they all

Indians - . by brett and dillon . introduction. did you know there are more than two hundred tribes in the world! listen

Comanche Indians - . bygage,keenan , markaythia. homes. the comanche indians were once part of the northern shoshone