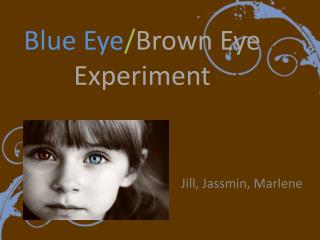 Blue Eye / Brown Eye Experiment. Jill, Jassmin, Marlene. Purpose. To try segregation through eye color instead of skin color. It was a result of Martin Luther King Jr.’s assassination, as well as the idea was derived from Hitler’s attempt at the holocaust. Who?. INTO THE BLUE - . blue. adjective. 1 …something that is blue is the same colour as the sky on a clear sunny day. he

Languages and nationalities in Australia - . australia is a multicultural country. yellowish/pale complexion moustache a

The Blue-Haired, Green-Eyed, Tiny, Freckled, All-Around, Weirdo - . melody was sad. she was so different!. everyone had

Electronic Structure and Periodic Trends - . chapter 5. experiment 1. add an elemental gas to a cathode ray tube and get

Blue by Junior Infants - . a blue fish that swims in the blue sea. a blue pony with a long blue mane. a little blue smurf