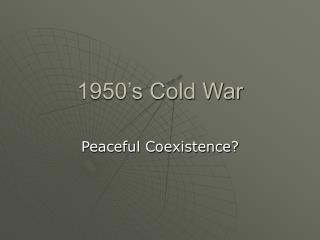 Getting from here to there and back – The impact of a few transportation innovations on history - . class 3 william a.

Cold and Flu - . helping you to: create a healthy lifestyle! click here to play an interactive game. cold and flu. what

An overview of the Cold War - . how can a war be ‘cold?’ what were the hotspots of the cold war?. cold war. after

Cuba in the Cold War - . fidel castro. born in 1927 attended jesuit schools as he was growing up he attended law school

Cold War in the 1950’s - . republican dwight d. eisenhower becomes president in 1953 brings in a new era of the cold