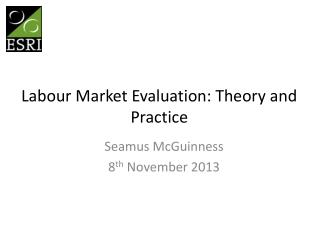 Labour Market Evaluation: Theory and Practice. Seamus McGuinness 8 th November 2013. Why is Evaluation Necessary. It assesses the extent that policy initiatives are achieving their expected targets and goals.

State of art - Evaluating sustainability through an input-state-output framework: the case of the italian provinces

The Labour Market Supply - . a2 economics. aims and objectives. aim: to understand the factors which influence supply of

THE LABOUR MARKET CONTEXT: THE DEMAND SIDE OF THE EQUATION - . presentation by tom zizys from research to practice

Evaluation of Labour Market Policies: The Use of Data-Driven Analyses in Ireland - . elish kelly economic and social

The Labour Market - . content. the demand for labour, the marginal productivity theory influences upon the supply of

Pricing in Theory and Practice - . learning outcomes 1) to review the knowledge about concept of equilibrium price. 2) to