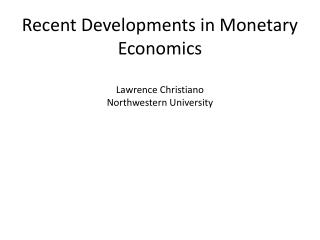 Recent Developments in Monetary Economics Lawrence Christiano Northwestern University. Overview. A new consensus has emerged about the rough outlines of a model for the analysis of monetary policy. Monetary Economics - . money supply process. recaps. we have learnt the concepts and measurement of money. while there

Recent developments in CHIMERE - . time. realism/complexity. accuracy and realism for research and operational