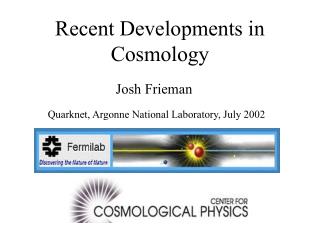 Recent Developments in Cosmology. Josh Frieman. Quarknet, Argonne National Laboratory, July 2002. Cosmology: an ancient endeavor. How did the world around us come into being? Has it always been like this or has it evolved? If the Universe is changing, how did it begin and what will Quantum Gravity and emergent metric - . why do we need quantum gravity for cosmology ?. gravitational equations provide

INCLUSION IN ACTION - . 4 th july 2012. today we will…. review and consolidate our understanding of recent developments