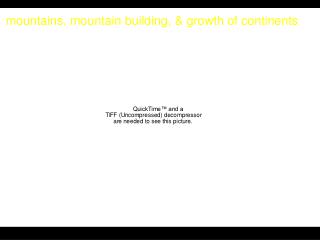 The Theory of Continental Drift - . continental drift theory. proposed by alfred wegener in 1912 250 million years ago,

Who Wants to be a Genius? - . final exam review. _________ are the longest subdivisions of geologic time. eons periods

Section 4 Deforming the Earth’s Crust - . chapter f4. bellringer. compare the mountains in the photographs. write a

Chapter 12: Earth Science - . a theory proposed by alfred wegener in the early 20 th century. the drifting of continents

The Puzzle Pieces - . one can easily see how the continents formed a larger land mass before breaking up. fluid earth.