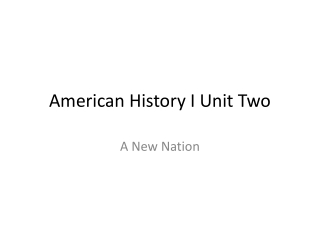 American History I Unit Two. A New Nation. Causes of the American Revolution. Video Clip. EQ: What were the causes of the independence movement in colonial America?. 1689-1754 France and Great Britain went to war on four occasions in order to become the dominate nation in Europe

Recent American History - . unit ii: post-war america, the new frontier and the great society. what should i be able to

US History Review - . units 1-5. unit one. ssush1 the student will describe european settlement in north america during

STAAR Flashcards 2012-2013 - . everything you need to know about american history, but were afraid to ask……. eras of