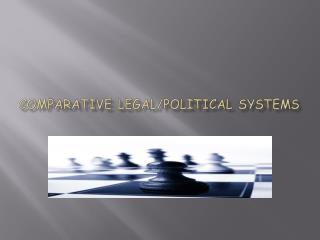 COMPARATIVE LEGAL/POLITICAL SYSTEMS. TOTALITARIAN. Definition/Philosophy : A political system in which total authority is exercized by a centralized government. There is no political diversity and dissent is not permitted. Global Economics Eco 6367 Dr. Vera Adamchik - . sources of comparative advantage. in this chapter, we will discuss the