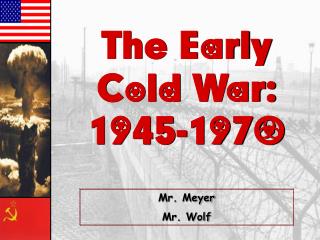 IMPACT OF POLITICAL DEVELOPMENTS BETWEEN 1945-1970 - . ssush23 the student will describe and assess the impact of

Early Cold War - . founding of the u.n. idea from league of nations and atlantic charter begins in 1945 general assembly

The Early Cold War: 1947-1970 - . part i: “reconstruction and confrontation”. the ideological struggle. soviet