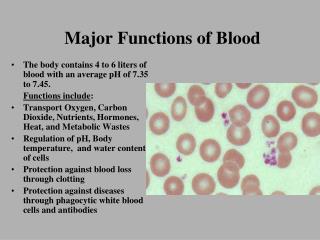 Major Functions of Blood. The body contains 4 to 6 liters of blood with an average pH of 7.35 to 7.45. Functions include : Transport Oxygen, Carbon Dioxide, Nutrients, Hormones, Heat, and Metabolic Wastes Regulation of pH, Body temperature, and water content of cells

Chapter 10 Blood - . “out damned spot! out, i say here’s the smell of the blood still, all the perfumed of arabia

Blood (RBC) - . 17. overview of blood circulation. blood leaves the heart via arteries that branch repeatedly until they

Blood Supply to the Nervous System - . objectives. 1. describe the importance of blood circulation to the brain. 2. list

Identification and Characterization of Blood and Bloodstains - . summary. introduction to blood identification of blood