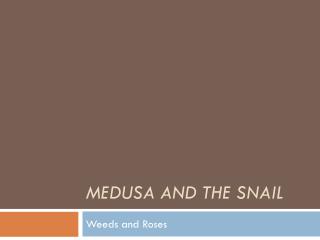 Medusa and the Snail. Weeds and Roses. Weed #1—Use the prompt. Halo analogy Why are you given the whole prompt instead of just a quote? What does the prompt ask? “Defend, challenge or qualify Thomas’s claims.” Okay, so what MUST you discuss?. Ways to use the prompt :. Reference author The Snail - . gan blwyddyn 5. year 5 have been using microsoft word to create their own version of ‘the snail’ by

The Snail - . william cowper. to grass. or leaf. or fruit. or wall. the snail sticks close not fears to fall,. as if he

Medusa - . kenyon bones. the birth or origin. medusa was a monster, one of the gorgon sisters and daughter of phorkys and

Medusa - . read the poem…. stanza one. dramatic monologue. the suspicion appears to be about an unfaithful lover –

Medusa - . what's her weapon?. people get scared because of what she looked like. what powers does she have?. whoever

Medusa - . lo: to create a presentation use teamwork to analyse a poem for it’s themes. . task. to prepare a 5 minute

Medusa - A blackly humorous version of the myth. medusa. by carol ann

Medusa - . what was medusa?. a beautiful maiden a monster a god a gorgon. $1,000. if you look at medusa straight in the

Medusa the Gorgon - . greek gods and creatures . the story of medusa

Medusa - Isaiah and mikey. medusa. the facts about medusa. medusa was turned into a gorgon by athena. before she got

medusa - . guardian protectress. medusa is a roman myth and is a type of creature known as a gorgon and is known for her

Medusa - . by aubrey arterburn. heritage. her mother was a sea creature named ceto daughter of gaia. her fathers name was