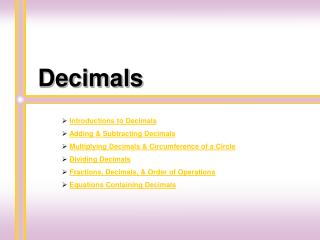 Multiplying Decimals by Decimals - . 15.46 x 3.6. set up the problem vertically. then multiply as if the factors were

Decimals - . what good is maths?. decimals:. in our number system we use a dot called a decimal point to separate whole

DECIMALS - . a decimal number is a number with a decimal point in it, like these definition:1. a linear array of digits

DECIMALS - . decimal place value and rounding decimals. for learning to happen:. remove all other thoughts from your

Decimals - . children should be led to make their own investigations, and to draw upon their own inferences. they should

DECIMALS - . are delightful!!!!. adding and subtracting decimals. what do you need to keep in mind? line up decimal

Decimals - . mr. walker. what is a decimal?. it is a dot after a number. every whole number has a decimal on the end,

Decimals - . to do: a restaurant offers a 10% discount. do you prefer getting the discount before or after the 8% sales

Decimals - The relationship between fractions and decimals. decimals. two questions. 2. ponder. what fraction of the

Decimals - In our number system, digits can be placed to the left and right of a decimal point, to indicate numbers

Decimals - . place counts!. place value. place value is the digits “address” in the number. think about where the

Decimals - . multiplication and division. what is to be learned?. how to multiply decimals by any number how to divide