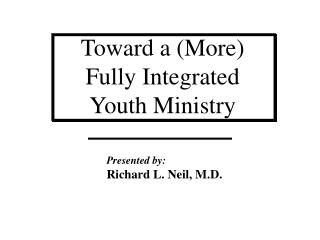 SolidWorks Simulation - . what is solidworks simulation?. it is a design analysis software that is fully integrated in

Youth Development - . an ongoing process through which young people attempt to meet their needs and develop the

Mentoring - . marie connolly. why mentoring in ul. set up initially as a sub group of the women’s forum demand across

“ I ” Kids Youth Today: Who Are They? - . the roper youth report presentation prepared for the boy scouts of america

The MC - . in 1991 stephen’s life was radically changed when he gave himself to jesus christ. then he discovered